Help, Hell and highwater (part two of the saga)

In my last post I mentioned that I have a problem, but didn’t go too far in getting to what it is.

I do have a terrible habit of getting off-track, or at least, trying to put in too much supporting information. I do the same when I speak, I’m good at the never ending story.

But that’s not the problem that I am referring too.

My mental health is part of the problem, to be sure, but it’s not the problem I wanted to talk about.

The problem I want to talk about is part of the reason for the deterioration in my mental health more like it.

I am sure there are very few CEOs or even CFOs that are under the constant stress that I have bought upon myself, with the wise universes help. Or That the universe has given me to deal with with my collusion.

’cause people keep telling me not to rescue any more dogs, and I keep trying to explain that I don’t rescue dogs. If I rescued dogs I would have two hundred.

I mean literally, not joking. Probably would be more, as I know of hundreds of dogs that need to be rescued.

So that brings me round nicely to a point where I can just state the problem and then in other posts, I might tease the story out some more.

So, the problem that seems insoluble from here, from my vantage point, high in the twenty hundred and fifteenth year of our Lord Dog.

I have living here in the house with me far more animals than I can cope with. That’s it in a nutshell. In fact I have been so over capacity for so long, that it just seems sort of normal.
I mean stated in mere words, it doesn’t seem that bad. I mean how bad can it be. We all love dogs ¿no? and some of us love cats too.
After all, the current crop are just the ones that are still here with me. 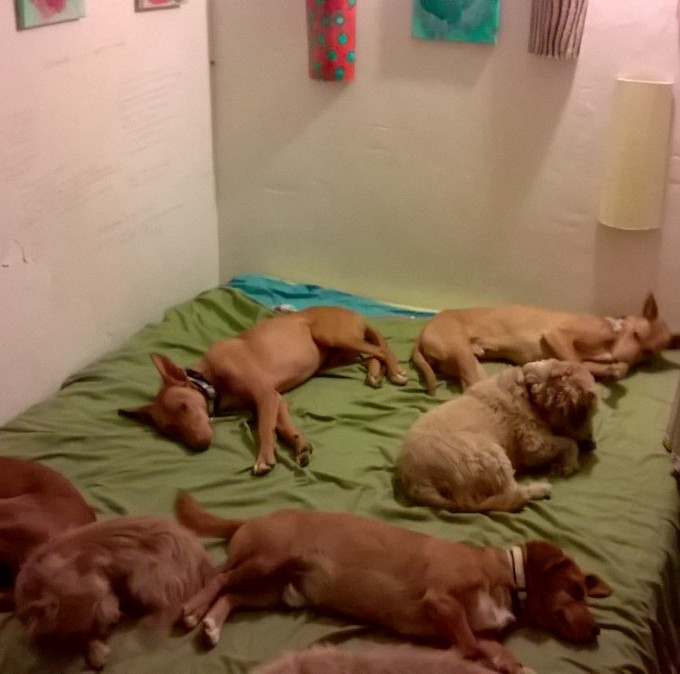 Since I moved here I have re-homed, or taken in, or taken to the vet to be put down, in each case as it has needed to be, twenty something animals. I am a bit lost count right now. I am going to do the list again soon, but we are talking about a lot! (26 it turns out, not counting Eni’s death, of course, nor already dead doggies) All with no help from any organisation, and very little help from anyone, except my fabulous Gloriescu, without whom, I would be eating from the rubbish or who knows what?
I am a person with no income, for a start. I have no regular income of any description. I have no pension, I am not retired after all. (another good theme for another post)
I survive by begging from a couple of my closest people, ’cause I have too much pride, to beg more widely, and from the meagre earnings on my meagre sales. If you are thinking of getting in on the ground floor of the art boom, now’s your chance. make me an offer!

But it’s not only financial. I mean, in this world, everything seems to come down to finances. I suppose with more money one could buy solutions to any problem. Or not? There are those problems that have nothing to do with money. Like lives in the balance.
If I can’t find them a better home than this one, then I keep ’em here. And it shouldn’t be that hard to find them a better home than this one really! This one has too many animals for a start.

Let us not forget that the problem of non de-sexed animals is endemic in Spain, so there are no homes that aren’t filled. The Guardia Civil, (a type of police force) stated last year, or the year before the number 325,000 abandoned animals in that year. So anybody who takes in animals has a houseful, and the rest of the houses aren’t worth looking at.

However, I need to point out that I am a person who only just manages to look after himself, having never done it in my whole life until now. I can just manage to keep myself fed, ’cause that’s kinda important, but only just. I do tend to have some fall back options that I eat four times a week or so. Used to be big fat peanut jelly and butter and jam sandwiches, but becoming veganised put paid to the butter, and a desire to cut out all sugar put paid to the jam.

I have been trying to eliminate wheat too.

I mean if wheat is the basis of our civilisation… look around you. It can’t be good.

But I haven’t got there yet. and lately I have been falling back on the wheat front too, eating more bread again. But never white bread, I point out in my defence. so now it’s toasted bread with salt and my special oil, and peanut butter and bananas, if I have them in the house.
Or toast with my special oil, hummus, tomatoes, spinach, capsicum and cucumber, with garlic and ginger diced finely on top. That doesn’t seem too far off a good meal.

But I digress, as usual. Food is a good subject for several posts.

Luckily, for the animals there is such a thing as dry dog food and dry cat food. Part of me recognises that that is a very unnatural diet for any creature, but the other part says that it keeps them alive and seemingly healthy, so mustn’t be all bad. I do buy only the upper half of the quality range. In fact I am spending a fortune on animal food lately.
It is hard to find a better option from here.
One thing I can no longer bring myself to do is to go to the butchers and ask for bones or scraps, as I believe meat ‘is’ murder, and wish to distance myself from it.
I haven’t eaten meat regularly for more than a decade, and I have completely stopped since some time back, and given up the eggs and the dairy too. (going vegan is definitely worth its own post)
Now, I recognise that the dog and cat food I buy is coming from the same industries or even worse ones, but it is just one of my as yet unresolved problems. That will be worth a post too.

Anyhow, there, calmly stated is my dilemma, and that means I should try and post the post, and hope for another chance to write soon. It took me all day yesterday to write and post two posts, and I have the problem of the artwork waiting to be finished too. (that would make another juicy post)

But if I can get a bit of practise in, and get some verbal skills going I hope to entertain you with the surreal stories of my day to day. as well as go into the whole how it all came about in more detail. Everybody here deserves their own post. And they will get it.