I need help, hell! I need a miracle (part one of however many this turns out to be)

I am in an impossible situation, and there is no easy out either.
You can believe me when I say that, I’ve been over the options about a million times, even as it has all been building up to this point, and there is no easy way out (and there was only a couple of points when there have been outs, and I didn’t take them)
except the aforementioned miracle.

I would assume you need a bit of a primer on what’s going on. This could easily get real long, so might have to split it. (have changed the title to part one of many)

I live in a village in the mountains in Andalucia, in Jaén specifically, which is the inland south of Spain, and I regret moving here greatly.
For anyone who is reading this from a civilised country, you may find it difficult to imagine a place where everybody is scared of dogs, treat them as if they were wild beasts, not man’s best friend, and yet have several dogs for each household, almost none of which are spayed, leading to a ongoing disaster, that nobody even cares about.

That’s my take on it, your mileage may vary.

I will go into more detail in other posts, if my new-found motivation to write some of this down carries on.

It’s an incredible situation, as you can imagine.
It doesn’t make any sense at all, unless you completely take away the idea of animals having any soul, any intelligence or any feelings at all.
Then it makes perfect sense to have an enormous dog tied up in your yard, permanently. Or have a shed full of hunting dogs, each tied to a a different place so they can’t touch each other or lie down together, never going out except on two to four days a year, when they are expected to help kill things for sport. The lucky ones live in a shed, as many live outside in the elements, or inside a roofless building. Tied to the wall, so forced to suffer the full sun and the snow, whatever comes along.
I am not kidding and I am not exaggerating. and I of course have photos.
But I am not going to post that here.

I knew something of the problem of hunting dogs, as Madrid is full of rescue dogs, especially ‘galgos’ which are basically greyhounds.
But I just didn’t really know that it was as it is, and although I knew there were problems, even though people were warning me that I wouldn’t like it, that I wouldn’t be able to cope with the resident red-necks, I laughed them off.
‘Cause if there’s one thing I am good at, it’s making acquaintances and ‘fitting in’ although always as an outsider. Hell, I’ve always been an outsider even in my home country. I was sick to death of living in a big city, Madrid in this case, and was sure that I would be far better off in a nice quiet corner of the country.
I am a country boy anyway, having lived in several small towns in the bush in Qld, both as a kid and as an adult. Well, as an adult in more isolated places I suppose, much as I wanted here.
I did, of course, want to live in the countryside, away from all distraction, but didn’t have enough money to do that, so thought that a village would be the next best thing.

I moved here with my little doggy, Eni, faithful companion since I got him from the Logan City dog pound, back in 2002 or 2003. That whole story is worth a post of it’s own too. (which I just put up) Faithful companion ever since, and me to him, although I pat every dog I see, if they let me. I’m a sucker for a soft underbelly.

Within a week or two, I had two dogs.

A very disagreeable woman (my opinion of her is actually a lot worse than that now, but at the time I would have politely described her as a very disagreeable woman) bailed me up in the street outside her house and asked me if I wanted a dog. I, with no hesitation at all, emphatically said that I did not want another dog as I was perfectly happy with my little man Eni, as previously described.
“Much more beautiful than your dog” she insisted, a ridiculous concept really.
“oh, that doesn’t come into it”, I returned, “I don’t want another dog”
“he’s really spectacular, not like your poor ugly pooch” (translations are a little loose here, but you get the idea)
This got me laughing, and I made to be on my way. In all the times I had passed in front of her house since I had moved in, I had never seen another dog there, or that appeared to be hers. There are often several little dogs in that section of street, but they seemed to be from houses further down.
“Good day to you fine madam” I finished and went to take off.

At which she broke down, almost to tears, in an instant, wailing “oh please help me kind sir, I’ve got six dogs and I am not able to cope with all of them.” (liberal translation continues)
Taken aback by her change of tack, I asked, “Where are they”
“Down in the cellar” (to be kind with the translation, I should say down in the hole, as that’s more like what she said. ‘Zulo’, if you are interested. I was going to give you a google translation, but google is trying to insist tonight that it translates as zulo. 🙂 ) “and they get flooded when it rains” she continued, still in that wailing voice.
“oh my, that doesn’t sound too good.” I replied, thinking to myself that it sounded like a small piece of hell on earth! Which in the end I have wound up thinking about this whole village, the whole province, the whole country really, but the seventh levels are here in this village.

The whole time in Madrid, I had only found myself on the spot like this really hard once, for a little doggy that was found in one of my regular walks at that time, just as I showed up. We took it to see, and no, no chip. I ended up taking it home, but luckily for me, the owners turned up the very next day and I was able to offload Chipi (pronounced Chippy) and go back to being a one dog man. After all we lived in a two room flat, and both rooms together were 25 metres squared, so one dog was enough. I sort of believe one dog is enough. There’s a special bond between one dog and his human, although there is something beautiful about every number really. Chipi later died of a chicken bone gone wrong, so I heard around the park.

Next minute she’s running off to grab the dog, and I hesitated there in the street. “What will I do now”, I thought, not knowing that I had to start running and not look back, leave my possessions, leave my newly bought leaky roofed house and run, never looking back. Of course I just didn’t know that at the time.

So next thing I had a long haired dog (horror of horrors, although Pebbles also was) thrust into my arms and all sorts of perfunctory thankyous and congratulations being uttered.

I caved at this point! My big mistake! I thought to myself, “poor little guy, if I can save him from the horror of the hole, well, how bad can it be”. I only had to look at Eni’s little horrified face to have an inkling of what was to come. But I took off with Bobby (Bobi) in my arms and we headed back to the house. After all I had no leads, no collars, nothing. Eni hadn’t been on the lead for seven years or so, and didn’t wear a collar.

So that’s how Bobby come to join the, at the time, very small household. 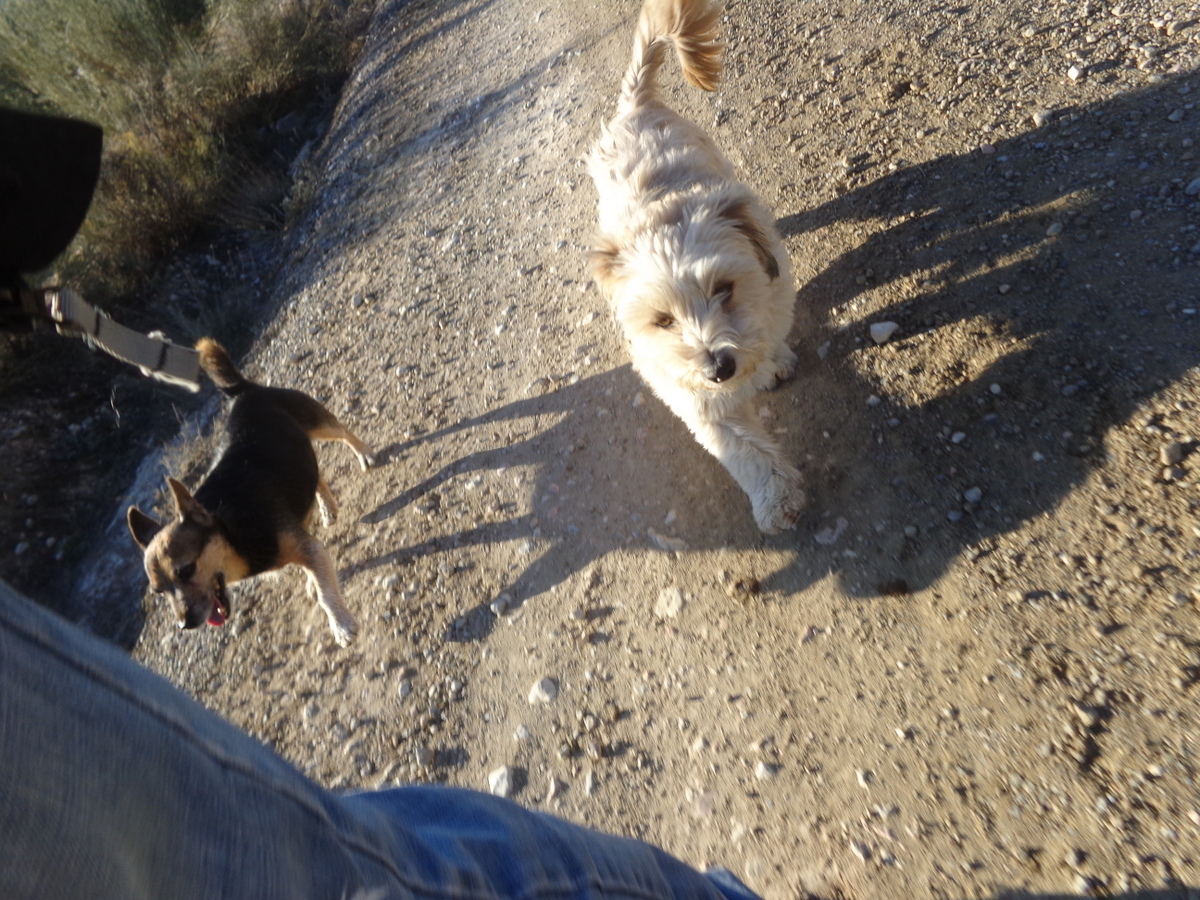 Eni to left of shot, Bobby to the right, stuck in the middle with you.