getting Eni, who is later to be getting down.

And later still to be getting put down. 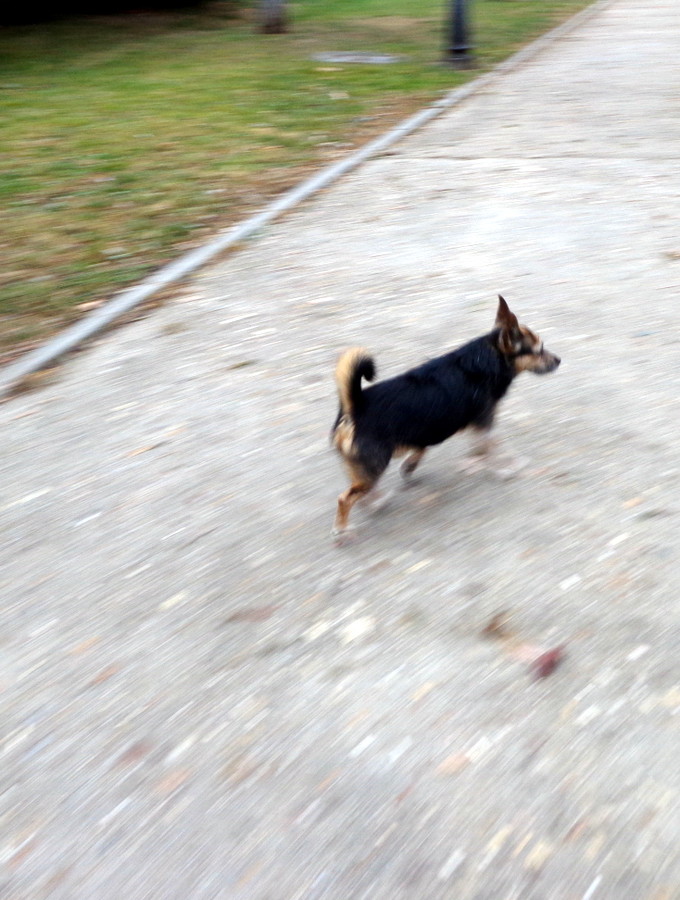 Eni in his later years, having fun in Madrid

Eni once had a blog, which you can find over at Ha Llegado el Lider.
He was the cutest little guy, and his life was cruelly and unnecessarily cut short by mobile phone use at the wheel. (that’s my theory, how else would someone run right over him with both wheels at slow speed with a frantic person in front of their four wheel drive telling them visually and audibly not to proceed. They have to have been writing a wassap or similar to be paying so little attention to what was going on. They didn’t stop until I was bashing on the bonnet and the windshield of the slow moving beast, but by then it was too late.
Eni had suffered serious internal injuries and I had to have him put to sleep to save him from more useless suffering. (I am balling my eyes out again at the memory, something that happens every few days still))

I had brought him with me from Australia, as there was no other option when I moved back to Spain with my Spanish wife.
What else could one do? apart from not having rescued him in the first place. (I did have other plans, as I will go into in a bit, but they were frustrated by the other players in the drama)
Getting Eni was my wife’s idea really, as I hadn’t had a dog since I moved to the city to go to Art school, and with my international lifestyle (lol) it really didn’t seem to that good an idea. But she was reading the weekly free paper there in Kingston and every week they featured a poor little soul from the pound, to encourage adoptions.
Well, one week she saw Clyde, a wee brown dog, as Billy Connerly would say, and wanted to go rescue him.
She tells me she thought it was a good idea as I was ‘mohino’ roughly down in the dumps, and she thought it would cheer me up. I didn’t want to disappoint her, and really missed having dogs, as I had had them almost all my life.

So I was a willing participant in the whole scheme.

So that Friday afternoon we went down to the dog pound, not at all far from my house there in Kingston, and asked for Clyde. But alas, Clyde had already been re-homed.
However, now we had formed the idea of taking home somebody, off we went to look in the public access cages.
Of course every face there begged for attention and a chance to live a real life, but when we got to cage 7 there was Eni, so endearing, on his back with a hard-on almost turning himself inside out with emotion at the thought of being my/our friend.
It had to be him, and we took a bee-line to the window, to claim him as our own.
And just in time too, as the people who lined up behind us were after the same little fellow.

He was pretty special.

I hesitated, conferring with my wife about letting them have him as they had a young family, and I thought they would make a great home for Eni.
She, however, was adamant, Eni was our doggy, so that’s what we agreed.
As it turned out nobody could take him at that moment, as he had to be castrated before he would be handed over. But we were able to reserve him, and program his castration operation for the following Monday and we left, feeling relieved but nervous at the same time.
I mean, I knew the chances were that we would be moving back to Spain sometime, probably sooner rather than later and what the hell were we going to do with a dog at that point.
I suppose I assumed that I would hand him over to my mum, as she didn’t have a dog anymore, since our beloved Pebbles (also rescued by me from the side of the road, when I was all of five years old) had had to be put down, many years before.
I thought she needed to be pushed into having another dog, and so that was my thought process at the time.
When Monday came around we walked down to pick up Eni, and although he had just been operated on, he was sprightly and enthusiastic and we went for a far too long walk, but he loved every minute of it.
We were five in the house now, as I had brought two cats from my previous share house, Floppy the wondercat, and Gordi his mother.
Eni, Floppy, Gordi, Lourdes and I lived a quiet lifestyle in the suburbs, in tree filled Kingston, with thousands of birds, bats and insects, in my little three bedroom house, the first one I had ever bought.
The months passed by, I was working at night at the Parmalat milk depot, and Lourdes was studying for her exams for several classes towards her Philosophy degree. She would study and watch Australian soap operas (Home and Away, a special favourite) and when I came home about two-thirty or three o’clock in the morning, we would all go for a walk.
The cats came too.
I have always had cats that think they are dogs.
It was all domestic blissish, although I was probably pretty burnt out by my job. (a description of same would be worth a post on its own, so I’ll leave that there)
But having crappy, dangerous or boring jobs is par for the course for an artist who hasn’t made it yet. A least Australia then was still basically a workers paradise, and you could earn good money by heading in the direction of jobs that most people wouldn’t or couldn’t do.
I ‘spose there is still good money to be made working in Australia, but the situation certainly seems worse from the outside.

Anyhow, I digress, as is my style.

I was putting all of our money into paying the mortgage down, and hoping to convince Lourdes to stay on in Australia, until we could buy a couple of houses more, pay them down and use the rent from them to live on once back in Spain, so I could paint, or be an artist, full time, whether I was being a great success or not.
’cause I was still not finding success.
I have only ever really wanted to be an artist, wanting most of my childhood and some years after, to be a bird painter. (teenage hero, Raymond Harris Ching)
Earlier in my life, I suppose I wanted to be a fighter pilot, which just shows how far we come in life. I certainly had what it takes in all aspects, being at or near the top of the class in Physics, Chemistry and Maths.
I did that easily too, without ever spending any time studying, instead coming from the working class, had been working in part time jobs from the age of thirteen.
However, the school nurse decided to investigate my vision, for what reason I can’t remember, but the upshot was, nobody was more surprised than myself to find out I was quite myopic, and there went the dream of flying through the air bombing brown people. (which I am sure I didn’t really have, wanting to try and use a military career to try and enter the space program I suppose, and be an astronaut.)

I was devastated, and that whole experience is probably worth its own post too.

And although I was already selling paintings from the age of fourteen, I was not studying Art at school, choosing instead Geometrical Drawing and Perspective.
I suppose it was my older sister’s bad experience with the Art teacher at Maroochy High that swayed my decision there too.
Then disastrously choosing to ignore the possibility to study Art at all, until years later.

Lourdes finally decided she had had enough of the quiet life, never really coming close to the idea of spending some years in Australia, as mentioned above.
So she headed back to Madrid, in time do her exams and she wasn’t coming back.
She loved our little house and the garden, but she was bored out of her mind, and with so little contact with people, apart from myself, isolated in the world of a stubborn Spanish speaker in Australia.
So I was making my plans to go back to Spain too.
I started making intimations to my mother about Eni moving in with her, and she was having none of it. Absolutely not, seems to have been the thing, so I started investigating how to take him with me. (the details of which would make another good post)

In the end Eni arrived the day after I did to Madrid, and lived out the rest of his life in Spain.

He was pretty famous in a couple of barrios of Madrid, and I like to think he had one of the best dog lives ever.

I miss him so much still. although there’s almost never any time to do so. but I miss him whenever I get a chance.