going over the damn wall, too much Coffee?

So, how is it that seven dogs and five cats is such a problem?

The cats aren’t really that much of a special problem in themselves. Well, apart from Coffee the new kitten, who makes life miserable for every one at times. At the same time as he is one of the cuddliest, most in your face cats around. He sleeps with us every night. He often curls up in the angle between my shoulder and my neck, and purrs away like a little mad purring engine, which is both a delight and a horror at the same time.

Mayday however, doesn’t see him in the same light. Coffee makes life impossible for him. Whenever he comes in to cry out for some food, Coffee attacks him mercilessly until Mayday usually just takes off again. He is a real pain in the arse, little fucker. He gets plenty of training in the fighting arts from the dogs, especially Lina, who fights non-stop with whoever is willing, and Chippy, who is about the same. They never seem to have to sleep, admitting the exaggeration, as Chippy and Lina are asleep by my feet right now. But it wouldn’t take much to get him up and at ’em again. He was running around just before.

I should have known Coffee was a little terror, by the way he had been abandoned in a chook shed. He was obviously quite well fed when he suddenly appeared there.

The story of the arrival of Coffee to the household is an illustrative one.

Let me go back to the day of his arrival. The day before really, as the calendar works.

My father was here. Yes, here in Castillo after coming all the way from Kingston, Qld, Australia just to watch videos all day.

He paid for this house after all. (I paid for his, I should point out, as he lives in my house in Australia. He paid too, I should also point out. But the money to buy this mistake in Spain came from him, is what I am getting at.)

We were both watching a movie at the time. I can’t remember which. We didn’t watch that many movies together, as I am too much of a workaholic to be able to watch anywhere near as many movies as I would like to. Any, it’s not important to the story, as the movie was interrupted by a knock on the door.

Which in my house is instantly followed by the excited barking and yapping of a mountain of dogs. Or more a heaving mass of dog flesh, like a living, seething, noisy welcome mat. I fought my way through the pack and tried to push them back enough to open the door without letting them all out, as that only increases the excitement and causes some visitors to poo in their pants. I generally try not to let them out until I can establish who is at the door at the time.

Turns out it was the teenage girl from the funny little shop on the corner, with a pitiful, day old dying kitten in her hands, which she immediately started trying to hand off to me. “I found it in the bin” she said, as if that makes sense. Don’t get me wrong, I am not saying she didn’t find it in the bin. After all I have found three puppies in the bin, one who lived, one who died (put down), and one that was already dead. But they are a different story.
What I mean is that it makes no sense to me to try and give it to me, if she found it in the bin. I didn’t try and hand off any of my gruesome finds to anyone else. But of course, everyone seems to think I am an easy mark, or something. Which I must be as I took the kitten but roasted the girl, and later her family. My father was very upset, as he had already been very upset by my having so many animals in my care. So another one didn’t make things any better for him.

I let him know that I was also upset, but the thing right now was trying to save this little one’s life.

However, I couldn’t get the kitten to eat, to suckle from an eyedropper or anything. It was really too far gone. I tried all afternoon, but in the end, could only accompany it on it’s (probably) first and definitely last day. I slipped it in my shirt to keep it warm, and tried to feed it periodically, taking it with me when we went out in the afternoon for a walk. Walking past the sheds at the end of the road coming back from the walk, I could hear another kitten making a huge racket in the last of the compounds (or the first, coming back) but didn’t pay it too much attention, as I was busy trying to keep the little one in my shirt from dying.

Soon after getting home though I checked it again to try to get it to take some puppy milk, but it was not responding now at all, and a little later was dead. My heart was once again broken, as it has been so many times in my life, but so very very many times since I moved here.

I will refrain from putting any pictures of the poor little bugger here. I made a little place for him to sleep his eternal sleep for a few hours, with a plan to take him to a place later that night to set his tiny body down and allow it to return to the earth from which it sprang, and set his tiny soul off on its next ride round the merry go round.

So, late that night (four o’clock the next morning) I took him to the place I had in mind, to liberate his tiny body back into the ecosystem. Without having thought about it beforehand though, it wasn’t that far from where we had been that afternoon, and I could hear the other kitten, still making an enormous racket, eight hours later. I tried to get a look over the wall, but could only see a little silhouette of a man Scaramouch Scaramouch can you do the fandango. I mean a little kitten silhouette running back and forth on a higher level. I really wanted to just ignore it, but it was making such a huge racket, and so pitiful, that I of course couldn’t successfully do so.

I decided to head back home to get a torch and see what could be seen.

I went back with the torch and tried to find a part of the wall that I could possibly climb over. I tried going round to the other road and found that there was a metal door which I could leg up and see over. I shone my torch into the gloom and suddenly the wailing stopped and a little white face looked into the beam, like a faithful, looking into the light at the end of the tunnel of life. He came towards the light and came right out under the door and into our midst. We were, at that point, Bobby, Nina, Lina, Sonny and Willy, and yours truly, of course. All the dogs seemed to take him at face value, and cause he wasn’t even slightly scared of them, they did nothing to him either, and I saw no choice but to just scoop him up and take off for home.

Next day Neil (the aforementioned father) asked how the little kitten was, and I told him that he hadn’t made it through the night. (Neil went to bed very early, late afternoon, all the time he was here) but that in taking him to bury, had brought home another. And introduced him to the little white one. (The dead kitten was black by the way, but even so I did consider trying to pass one off as the other. Dad wasn’t really very attached to the animals, so there was a pretty good chance that he wouldn’t have known the difference.) 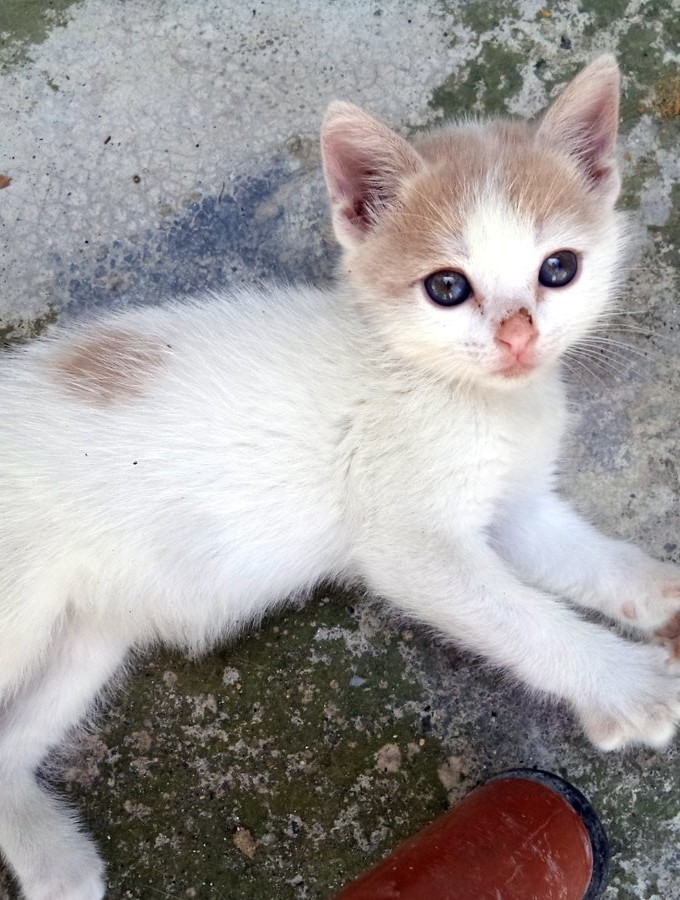 Coffee on one of his first days.

He made plenty of disappointed clucking noises but accepted that my reality here was indeed as I had described. Gloria later suggested Coffee as the name, after I described the kitten as being the colour of café con leche, or white coffee. And it stuck. And Coffee became part of the ever expanding Brady Bunch of surreality here in the house.

He climbed up and sat on Neil’s lap, most of the rest of the time that dad was here. So in the end, Coffee became the only other animal, apart from Bobby who dad could identify by name. I think he grew pretty attached to Coffee as Coffee is pretty attachable. He still asks after those two. 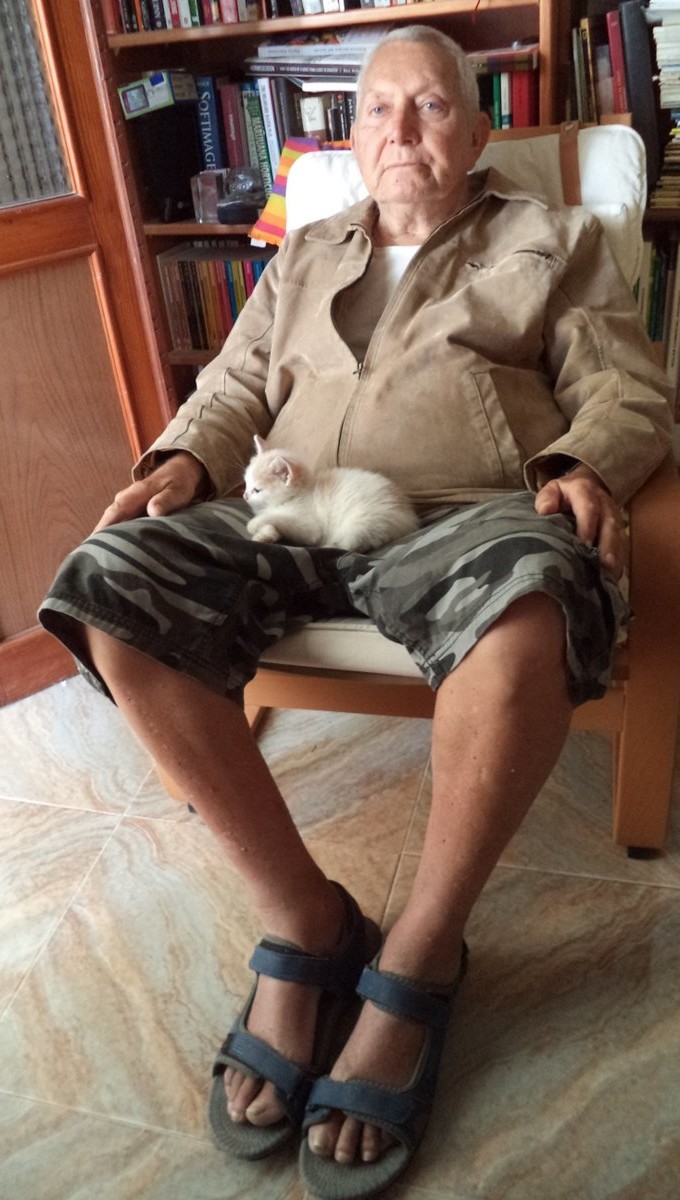 Those regular readers of the blog won’t be surprised by the gap between the pasts. I would be surprised if this blog has regular readers. I have had to turn comments off in the blog, as I was getting roasted by spam-bots and couldn’t afford the bandwidth charges, and after trying a few things, decided to just turn off comments. If you would like to comment, feel free to go to my facebook page and do so. Link is in the menu, but anyway here ’tis again https://www.facebook.com/spaingaroo